Midland Women’s Health Care Place was initially a dream. A dream of a centre, in the Midland area, where women could get counselling, information and support from other women and professionals. The Eastern Region Community Development Council prepared a funding submission for a women’s health centre. In July of 1994, they heard that their funding submission had been successful and a logo was commissioned by local artist Jude Taylor. Midland Women’s Health Care Place became a reality. The centre was officially launched in August of 1995 by Dr Fiona Stanley in the back garden of our first home at 26 Railway Parade in Midland.

In March 1996 the agency was Incorporated as MIDLAND WOMEN’S HEALTH CARE PLACE INC. with the first meeting of the Management Committee in April. The original Executive Committee members are commemorated on the Honour Board. Limited services were commenced, with general emotional counselling and the Sexual Assault Resource Centre outreach services offered. There were also three support groups running –  Post Natal Depression, Domestic Violence and Stress Management. We started a small library thanks to donations.

As the agency continued to grow, we quickly grew out of the building on Railway Parade, and in 1997 we moved to 61 Morrison Road. It seemed so spacious that we expanded services to offer more groups and counselling hours, to partner with Family Planning (now FPWA) for Pap Smears arranged in the lounge room once a fortnight.  Within 2 years, we started to grow out of this house.

In 2002 we applied for and received funding to run a Post Natal Depression program in the eastern region. During these years, we have run a number of different programs over and above our core work of counselling women. These programs included: Art Psychotherapy Course, Creating Well Women, Walking women, Assertive women, Women Dancing, a Panic/Anxiety Attack Therapy group, Pampered Women, Pap Clinics, First Click for Women (computer training), Bra Art , Women Walking and many others.

In addition to these programs we worked in close partnership with the City of Swan to provide services to women in the rural and isolated areas of this region, working with the Bullsbrook Neighbourhood Centre to provide groups for women, and even having Pap Smear Clinic in a room at the back of their premises. We also worked with the newly emerging Ellenbrook community to arrange Yoga and Belly Dance classes and start a pram walking group for the young families moving into the area. Funding sources were actively recruited and a variety of programs, some on behalf of larger regional partnerships, were undertaken. The Eastern Region Mental Health Agencies worked towards a Sunday Festival “All Together Live Better” to reduce the stigma of mental ill health in culturally and linguistically diverse communities.

From 2003 – 2006 the main push of the agency was to find a new building that was capable of growing with us. Through enormous determination, the Building Sub-Committee managed in 2003 to convince the City of Swan to set aside land on the Avenue for our new premises. Following feasibility studies and consultation with the Board, clients and Staff , a design was submitted and in 2005 we received a grant from Lotterywest for our new building. 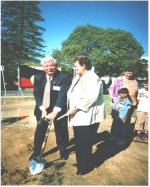 RAD Architecture was commissioned and became our Project Managers, supervising the planning, design, and building of our new “house” at 4 The Avenue, named the Val Ferguson Centre. An Aboriginal smoking ceremony preceded the site works, followed by the “turning of the first sod” by the late Mayor, Charlie Gregorini and our Chairperson, Val Ferguson . We moved in following the official opening on 25 September 2006 with no break in service provision and continuity.